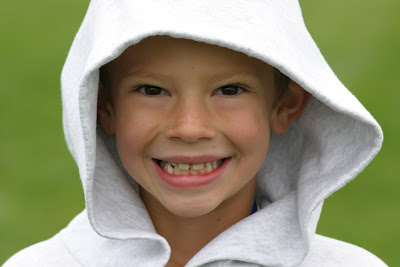 He’s our nephew, M. He’s one of Brother’s kids. And, since it was his birthday and all, Brother and Brother’s Wife threw a bit of a party at their house, with enough food to feed our entire state. This picture of M wasn’t taken at his party, because I (gasp!) forgot my camera, and it’s frightfully hard to capture Kodak moments when you’re cameraless.

M ended up getting these enormous darts with gigantic suction cups on the ends of them as one of his gifts. He also got a Nerf gun, which came with even more darts. After all the wrapping paper had been tossed aside and lay, forgotten, on the living room floor, we began to feel like we were in a bit of a war zone, as darts were being fired and thrown everywhere. No chair had been designated as Switzerland, so there just wasn’t any safe place to be.

Hubs and I guessed that this is only the tip of the iceberg at Brother’s house. Brother, you see, has three boys. Three boys who throw things. We only have one thing-throwing boy, and Hubs and I know that stuff flies through the air at our house. I shudder to guess what that’s like, times three.

And really, Brother has to times that amount by four, because his littlest one, Miss A, seemed to enjoy the dart-throwing extravaganza as much as any of the boys, and we quickly learned that she was quite handy at pitching darts across the room so that they’d stick to the sliding glass doors.

Brother’s Wife has simply learned to deal with broken lamps and windows at her house, I guess. You may know her good friends, Duct Tape and Super Glue.

Eventually, after Grammy took some darts to the head, the boys were asked to take their darts outside, and the party really calmed down after that.

For the record, the boy has already asked for enormous darts with gigantic suction cups for his birthday. He has made sure that Hubs and I realize that he covets this gift of M’s. I’m trying to envision my house with giant darts whirling through the air, headed for the windows. Maybe in the next two months, the boy will forget that he waved a petition at Hubs and I, begging for this present.

You know, our one project which we hope to accomplish, in full, before Hubs’ stay-cation runs out?

Apparently, our house was built on a bed of granite, and we quickly discovered that we needed the blue-collar worker, Fred Flintstone, to come with a brontosaurus crane from the Slate Rock and Gravel Company, if we had any hopes of getting post holes dug.

You think I jest, but I do not.

Hubs has some arm muscles, people, and after digging for a decade at our house and losing 20% of his body weight through sweat, Hubs simply said, “I do declare! This just ain’t gonna happen in my lifetime!” Regardless of the size of the guns in your arms, digging through granite without dynamite is rather difficult, so we made some calls. We made several calls, actually.

And may the good Lord bless Darren and his Kubota. It’s good to have friends with tractors, and I’m fairly certain that Garth Brooks could turn that into a song.

“I’ve got friends with big tractors,
Where the granite just ain’t no factor…”

(I’m just helpin’ ya out here, Garth. Just throwin’ some brainstormin’ ideas out there.)

In less than an hour, Darren and his Kubota had moved enough earth around to grant us fifteen post holes and a giant pile of crushed granite, and the angels flapped their wings with happiness.

Afterwards, we made a little trip to the local landfill, because we inherited a pile of discarded firewood when we bought this property and built our house. Finally, with yard work being accomplished this summer, we got around to filling the back of Hubs’ truck up with chunks of old logs, and we drove them to the dump. When Hubs backed up to our dumping spot, we realized that clearly someone in Small Town had done some bathroom remodeling, as there were three toilets (one white one and two avocado green ones), two avocado green sinks, and an old shower stall thrown to the ground right where we parked. I slowly pulled on my leather work gloves, hoping that if I took enough time getting them on, Hubs would have most of the wood thrown out of the pickup.

He was polite enough to wait on me.

Soon I was in a bit of a log-throwing routine. Head down, grab the log, grunt and lift it, drop it over the side of the truck. It was a rhythm. From far off, I kept hearing a rhythmic ping-smash, but the sound simply wasn’t registering on my radar screen.

And then, I looked up in time to see Hubs heave another log, straight at a toilet. Or rather, straight at a pile of broken, smashed porcelain which used to be a toilet! I said, “You’re trying to smash that, aren’t you?” And Hubs just smiled and said, “And it feels fabulous!” When we left the dump, our truck bed was empty, and Hubs left a couple piles of porcelain dust behind us.

Apparently, smashing toilets feels just as good to a grown man as winning the lottery does.

Later on Saturday, Hubs took a shower, because watching Darren dig holes with the excavator on his little tractor and then throwing logs at potties was hard work, and we grabbed our niece and nephew, L and K, because a local group of kids were putting on a play in Small Town, USA, and the boy’s good buddy, Carter, had one of the starring roles. We bought tickets, the kids were scrubbed and spit-shined, and off we went to see Carter, before he heads to Broadway. 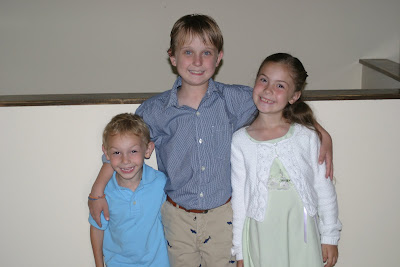 The boy and L enjoyed the play immensely. Little K decided halfway through the performance that he was hungry.

Dying from lack of nutrients.

And did I mention hungry?

He spent the second half of the play laying upside down in his seat, whispering like a broken record, “Please! I need some food! I need to go home and get something to eat! I’m starving! I can’t sit still because I’m so hungry!”

I’m happy to report that he survived his hunger, and Sister reported that he consumed 12,000 calories after we dropped him off at his house.

And today was Father’s Day.

And we spent a good portion of it at Home Depot, buying boards, and let me tell you this one thing:

I loathe, hate and despise buying boards. Every board (did I say every?) that we needed was at the bottom of the stacks, at the very back of the board displays, which meant that Hubs and I had to crawl into the board racks on our hands and knees and drag them out, one by one. And we weren’t buying short boards. No, ma’am. We were buying enormous, twelve-foot-long boards, and we were buying a lot of them. And Hubs, bless his heart, is the pickiest board-buyer ever born. He examines every board, not once, but three times. He tilts it, he tips it, he rolls it around, he sets it on the floor to look for warps. And, for every three boards that we put back, we were allowed to toss one onto our cart.

And also? I had to wear gloves for the board-buying fest, and I’m not a fan of any job which requires gloves, actually.

I’m more inclined to enjoy giving people great amounts of dollars to do glove-related jobs for me.

But Hubs would have none of that, so today, I was his board-buying accomplice.

And then we spent the rest of the afternoon visiting Hubs’ dad and my dad, what with it being Father’s Day and all.

And that’s all I’ve got.

1 thought on “Parties and Boards and Plays, Oh My!”