Hubs and I played some really sweet tunes on the iPod early this morning, to pump ourselves up for the physical labor that was facing us. We listened to Dolly Parton’s “Harper Valley PTA” three times in a row, because nothing screams out, “Get ready to work” better than a song by Dolly, and I clearly showed Hubs that I can still sing every single word, even though I hadn’t heard the song since my own mama belted it out in a sing-along-with-the-radio when I was in junior high school myself. And after Mrs. Johnson socked it to the Harper Valley PTA, we put on some old songs from one of the Rocky soundtracks, and Hubs and I both agreed that we probably need to look into getting one or all of the Rocky movies from Netflix, especially since Hubs couldn’t really talk about the boy’s 3rd grade teacher this year without shouting, “Yo, Addrienne.” Because it was her name, you know. And then, we listened to Hank belt out, “All My Rowdy Friends Are Coming Over Tonight.” And then Hubs had to go and completely ruin our playlist by listening to AC/DC wail and screech and moan like a cat caught in a rat trap, and I pretty much lost my adrenaline high for physical labor, although Hubs declared that no other band is a better primer for hard work than Angus and his boys.

(And also? Hubs wanted to name our boy Angus, whilst I was pregnant. The boy’s name is not Angus. And that’s a story for another night.)

If Hubs and I were on a reality show on HGTV, this would be the spot in the competition where we became frantic and started shouting, “We’re never going to finish!” And then I’d sit down and cry, and Hubs would throw a hammer through the Sheetrock, because all HGTV shows need some high drama. And then some designer would look at what we’d accomplished and proclaim, while he was rubbing his chin, “Interesting choice of materials and layout,” and then we’d know for sure that we weren’t going home with the million dollar prize.

And dang. I’ve said it before, and I’ll say it again: I’ve never actually been a millionaire before, but I know that I’d be just darling at it.

Hubs and I had some Manual Labor going on at our house again today, which did, indeed, involve gloves, and y’all know my feelings on any chores where donning a pair of leather work gloves is the first course of action.

I don’t so much love those types of jobs, and I think I’d actually prefer to clean a toilet at a rest stop along a busy interstate than stand outside when it’s 307 degrees and hold boards, with my gloves on. But, the flip side of that is after the retaining wall is finished and the Manual Labor has ended, it’s going to be simply golden, because right now, Hubs and I are both sick of staring at the worn-down hill of dirt that surrounds our patio. The hill where we could have filmed an entire documentary on the wonderment known as erosion. Seriously, people, our eroded hill was about as attractive as an old 1987 El Camino propped up on cinder blocks, wearing nothing but a slopped-on coat of gray primer.

I tried to make myself useful this morning by putting in the screws, and let’s just leave it at this: I tend to use the drill with very little skill, and the finished product usually results in crooked screws. And also stripped screws. And sometimes screws with broken tops. Naturally, Hubs is very patient with me in this area, and offers all sorts of encouraging words, like, “Gee whiz! A blind woman with no arms could have gotten that screw in there straighter than you just did.”

My mom even popped over for a while this morning, because apparently she is okay with jobs involving leather work gloves and enormous amounts of sunshine, so Hubs put her to work measuring boards.

And then she helped me put some screws in, and let’s just say that the two of us, combined, are even worse than just me at using the drill to add some screws to a project.

Poor Hubs was sweating buckets today in the heat, and he drank a case of So-Be bottles all by himself. Plus a cream soda that was roughly the size of a gallon of milk. And also a fifty-gallon drum of water. Apparently, he was feeling some dehydration.

Finally, 2:30 rolled around, and it was plum time for me to wash some sweat off of my body, change shirts and take the boy to swimming lessons. I was actually relieved that it was time for swimming lessons, so that I could escape the retaining wall, and as I drove off in the Suburban with the air conditioner cranked to “enormous Arctic wind overload,” I did feel a little bit guilty that Hubs and my sweet mama were still working like draft horses on a farm, but I recovered quickly.

And then, I sat down on a bench on the side of the pool.

The pool which is indoors.

And let me just ask, “Whose bright idea was it to sign the boy up for swimming lessons at the end of June in an indoor swimming pool?”

The temperature was roughly hell-degrees-Fahrenheit, with 3,000% humidity, and I immediately began to wish that Hubs had gotten to take the boy to swimming lessons, so that I could have stayed home and used that drill and my leather work gloves.

Sweat began to trickle down my back. It beaded up on my forehead. My hair started to frizz.

After an hour at the pool, I genuinely looked as though I’d accomplished a fantastic workout, so I strutted out of the recreation center with exactly that attitude.

Yep. Just ran a 30K on the treadmill in my street clothes, people. Step aside; I have some sweat here that needs to get outside to the parking lot and the air-conditioned Suburban.

And as we pulled out of the parking lot, the wet-haired boy announced from the backseat, “It’s freezing in here; can we turn the air conditioner off?”

He was lucky that I didn’t put him out on a sidewalk somewhere and make him walk home. 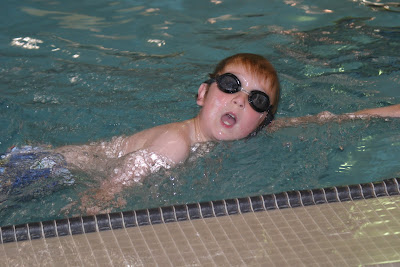 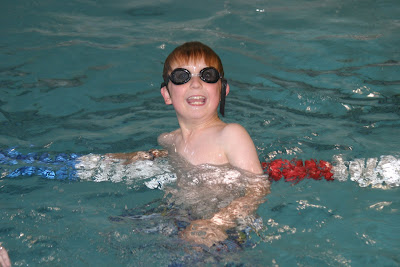 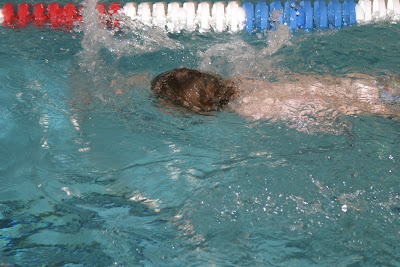