So my Way Back Wednesday post hasn’t happened for a couple of weeks, but that’s because I’ve been terribly busy surviving things like impromptu overnighters with the boy and his buddies, and encouraging everyone not to smoke crayons. (Seriously, I wanted to tape homemade posters around our house: Just Say NO to the Crayons!)

And I won’t even mention how busy I’ve been trying to survive cutting the end of my left thumb off while I was chopping the gourmet food commonly called Canned Biscuits. Or even how much time I’ve dedicated to learning to dial my new cell phone this week. (And really? My new cell phone actually made me ache for the old rotary dial telephones of the past, when things were just EASIER, and when you hoped that the new girl who just moved to town and plopped down in the desk next to yours had a phone number with lots of ones and twos in it. Because being friends with kids who had phone numbers filled to the brim with ones and twos was just easier than having friends who had a string of nines and zeroes. Telephone numbers dictated who your friends would be when everyone had a rotary dial phone; people just didn’t have the patience necessary to dial a pack of nines that were strung together.)

Hubs commented yesterday, “Are you going to scan an old photo for tonight’s post?”

I had the perfect snapshot in mind. It was one of Hubs. When he was six. In his plaid pants. That picture has brought me great joy over the years, because I can’t believe that the adorable plaid-panted kindergartner grew up and decided that he liked girls well enough to pick me. The only real problem is that Hubs threatened me with more than a flesh wound to my thumb if I plastered that particular picture on the World Wide Web, and I was simply too worn out last night to look through old snapshots for something else. Last night, I had an early date with a Tylenol PM tablet.

I called it my Slumber Party Recovery Plan. 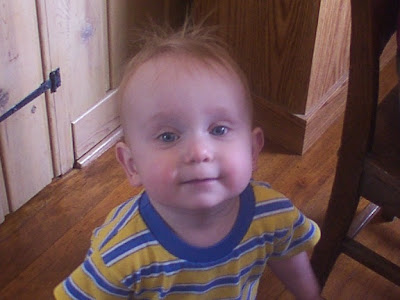 This is a photograph of my other favorite boy. It’s our boy. When he was fifteen months old. On one of his really fantastic hair days.

And this picture brings me just as much great joy as the one of Kindergarten Hubs does.

And the other thing about this snapshot? Well, we took it on our very first digital camera. The new digital camera, which was all the rage. It had one mega pixel.

And my new cell phone? Yeah. It has six mega pixels.