It may come as no surprise to you that I stayed up entirely too late last night. I was trying to finish reading a library book, because it was due today, and I’ve already renewed it three times. (Oh, people. I don’t read quite that slowly. I had two thick books checked out, but things have come up this summer, and getting through both books proved to be a daunting task this time around.)

I wasn’t sure that I had what it took to call the librarian one more time and say, “Yeah. So you know that book that I checked out…well…quite a spell ago? I’m rather slow with the reading, and I’m gonna need to go ahead and just get another extension on that thing. What? You cut people off after three renewals? Because you figure if they haven’t finished the book by then, they never will? Fine. I think I can pull an all-nighter here and get her done.”

Except this isn’t college any more, and I seldom feel the need to pull all-nighters when I don’t have a twenty-two page term paper due on geological shift patterns. Or a seventeen-pager due in philosophy, picking and defending either side of the issue Can Computers Be Programmed To Show Feelings?

Mmm-hmm. Been there. Wrote that. But listen, people. If you had told me back in 1992 (when I was more concerned with how much Aqua Net made it onto my hair and whether or not my acid-washed jeans were pegged properly at the ankles than I was with writing papers) that I would one day grow up to own a phone that was smaller than a deck of cards and three million times more powerful than the Apple computer that was roughly the size of a Gremlin that sat on my roommate’s desk, I would have laughed hysterically at you and asked how many cheap beers you’d had over at the student union.

And also? That last sentence there is seven kinds of ugly, but I’m going to run with it tonight anyway.

Computers being programmed to show feelings! In 1992, I was convinced that a DOS program could be written so that computerized robots could show emotions, and I hammered out a paper that received an A+ in bright red ink at the top; I was not convinced that computers would ever weigh less than seventy-three pounds.

Of course, I was also fairly certain that the white leather boots with the fringe that I owned were going to be timeless.

The library and I have some issues, rest assured. Regardless of the fact that I am a rule-follower to the perfect T and am one of those people who pays every bill on time, I have never seen the real need to return library books on their exact due date. I figure at a fine of ten-cents per day, I can afford a few days of leeway. Naturally, this drives Hubs up the wall, so he took to writing the due dates of my library books on the Grand Master Calendar (which shows my entire life, written in different colored inks), so that he wouldn’t find notices from the library in our mailbox, stating in Times New Roman, size 12, “Dear Jedi Mama, It is our understanding that the book you checked out in 1984 has never been returned, and we were wondering if you’d like to pay the eighty-cent fine now?”

People, I can find eighty cents in the sofa cushions, if I need to. I’ve just never felt severe pressure to return a book on time, although I never deliberately set out to keep them beyond their due dates. However, Hubs (bless his heart) has been monitoring this round of library books (like an eagle warrior!) that the boy and I checked out, so I knew that he was going to ask me the age-old question: “Did you send your books back?” And listen, people! I wanted to tell him, “Yes! Yes, I did!”

So I stayed up entirely too late last night, reading a Jodi Picoult novel that drove me bonkers, because the ending! It was just too unpredictable!

But I finished the crazy book sometime around 11:30, which may not be late for any of y’all, but my pumpkin status starts to get a little shaky then, so when the alarm went off this morning, I was ten kinds of tired. And also? I neglected to wash my face after Jodi Picoult and I wrapped things up, so I woke up this morning to see Revlon mascara streaked around my eyes.

But this was Wednesday morning, so getting out of bed, regardless of the book-caused exhaustion and the shock of blackened eyes, was really quite easy, simply because I had a coffee date planned with Christy, and we all know that Christy (who sometimes goes by the alias Sara Lee) bakes things whenever you head to her house for coffee. Even the boy, who was a little slow with his morning routine today, asked me, “Mom, should I eat breakfast today, or will Christy have a little something for us?” My kid knows that girl!

Thankfully, she didn’t disappoint us today. By the time the boy and I rang her doorbell, she was just pulling a made-from-scratch-with-real-butter coffee cake out of the oven, and her house smelled like cinnamon and love.

Christy and I kicked the three boys outside with little slabs of coffee cake and bowls of scrambled eggs, and we tried to lock the doors, so they couldn’t get to us, but they somehow gnawed their leashes off and got in anyway. They were thirsty. We filled their water glasses, and shoved them back outside, where they swam and swam and swam, and then hopped around like a trio of sugar-loaded bandits.

We had to laugh at their little half-naked bodies together, simply because…well…the boy is the white kid in the middle! Our boy has two colors: white-as-paste and red. Christy’s boys have two colors, too: tan and a lot more tan. 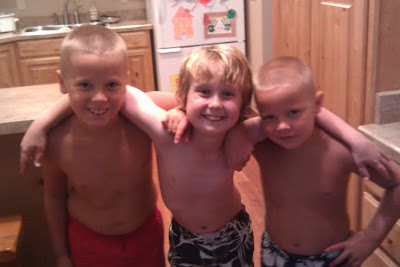 By early afternoon, the coffee cake was half-eaten and the boys had swam enough to have logged more time in a pool than Michael Phelps. Clearly, it was time to pack up and head back to the realities of laundry at home and creating a grocery list so that I could head to the major shopping center and secure food staples for my family.

Let me tell you: It’s all fun and games until the coffee cake is half gone!

As the boy and I were crawling into our Suburban, he said, “Mom, that was one of the best days ever! Gage and Deed are terrific friends!”

Ah, summer. I hate to see you wrapping yourself up here.

And also? I’d like some brownie points for getting those library books returned today, on their actual due date! The fact that I accomplished nothing else for most of the day was completely eclipsed by having my books returned on time.