About a week ago, Cat 2 discovered a simple fact.

GOOD GRIEF AND HOLY MIGHTY FOOD CHAIN! WE HAVE FROGS! FROGS ARE AT THIS HOUSE!

During the course of this last week, Cat 2 has had one phrase stuck in her head.

I WILL HUNT THE FROGS! I WILL NOT REST UNTIL I HAVE CAUGHT A FROG! I AM A BAD CAT, AND BAD CATS LIKE FROG LEGS FOR DINNER!

Hubs and I have had some fears throughout the week, because Cat 2’s obsession with the local frog hunt has become a little hard to break. Cat 2 is the creature who, after discovering a moth fluttering around in the house, will not rest until she chews it up in her mouth herself. If Cat 1 manages to beat her to the punch and catch the moth herself, Cat 2 will still not be convinced to call the hunt off. She didn’t chew the moth herself, therefore the moth may still be alive. Being told in simple English terms, “Listen, Bonehead! Cat 1 already ate the moth! The moth is gone!” does not convince her that our house is mothless. Because of this, Hubs has been known to yank a half-chewed moth out of the jaws of Cat 1, just to give it to Cat 2, so that she can finish the chewing, so that we can all go to bed.

We are a sick batch of people over here at the Jedi Manor. The things we’ll do to secure a good night’s sleep are almost illegal sometimes.

Throughout the last week’s worth of nights, Hubs and I have hidden the little frog tanks from Cat 2. We have locked her out of rooms to protect the whining green amphibians from a severe chewing. We have spanked her. We have scolded her. We have told her that good girls do not eat frogs.

And still, she has persisted with the hunt, because she will not be deterred.

Uncle Ted would be so proud of her, and I’m sure he’d feature her on his show as an example to all other hunters on how a real frog killer just doesn’t quit.

This afternoon, the boy exchanged silver coins at the stench-filled pet store for brainless crickets, and, while I wasn’t looking, he stuffed the crickets into Yoda Joe’s and Gru’s tanks. All was well. And, because I wasn’t looking when the crickets were staked out like lambs in a simulated, climate-controlled amphibian habitat, I didn’t realize that the boy didn’t return the frog tanks to the top of the bookcase after he’d fed the critters.

While I was pushing the boy through the homework tonight, we heard a giant crash.

A small frog tank had plunged off of the table in the boy’s bedroom, had broken open on the boy’s floor, and Cat 2 was going for the bottle of ketchup and filling out the necessary paperwork to audition for a spot on a new reality series called When House Cats Attack. There was much excitement and much screeching at our house for a few minutes. The boy was shocked that his cat had the audacity to attempt a cold-blooded kill like she had by pushing the tank off the table, and he screeched his anger with her. Yoda Joe screeched his panic for the entire southern end of Small Town, USA to hear, and then he attempted a full-blown anxiety attack on us, during which the boy and I fully expected him to flatline. He flopped and he screeched, and he told the world he was dying.

Thankfully, Yoda Joe was rescued and immediately transported to a safe zone, where he took an Ativan and breathed in and out of a paper sack until his double vision quit.

Hubs and I are now looking for an armored frog tank which weighs approximately three hundred pounds and cannot be manipulated by a thirteen-pound frog killing machine.

Rest assured, both Yoda Joe and Gru are safe; they are now members of the Witness Protection Program. They have new identities and new locations for now, until Hubs and I can secure a nuclear fallout shelter for them to permanently reside in.

In other news, I have decided that Small Town’s local pet store’s stench is very possibly the worse smell that I’ve ever breathed into my nose.

The second worst stench is the Scentsy brick of wax commonly known as Cinnamint. Oh, Cinnamint and I tried to date a few months ago, and the overwhelming aroma nearly depleted me of energy and heartbeats. I had to wipe the melted wax out of my Scentsy pot just minutes after I’d thrown it in. Because of that initial experience with Cinnamint, it has sat, completely unused, in a drawer in our kitchen for several months now. This weekend, as I was debating which wax to melt next (Sugar? Ginger Peach? Cucumber Lime?), I happened to see the Cinnamint sitting there, and I decided to try a second house call with it. I broke a chunk off, I threw it into the Scentsy pot, and I decided that maybe (just maybe and very possibly) it wasn’t as bad as I had first feared.

Two hours later, with my head swimming from a migraine, I knew the source.

The Cinnamint had taken me down, people. I know, without a doubt, that the Cinnamint is completely responsible for my Monday night migraine.

Hubs could not stand the leaves of the eucalyptus plant, and he would have died of starvation, had he been a koala bear. He was continually complaining, “I can’t go to So-and-So’s house! She has a wreath in the kitchen that’s full of eucalyptus, and I don’t care if she did invite us over for grilled steaks with whiskey sauce! I can’t do the wreath! I’ll die!” Indeed, Hubs would begin making his own funeral arrangements whenever he was within thirty feet of a eucalyptus leaf.

Naturally, I had great amounts of sympathy on him, and I’d say things like, “Don’t be a baby! It’s a stupid leaf!” And yet the big boy stood his ground, and he continually announced that he’d go into cardiac arrest and need the paddles, if he was exposed to the plant.

Dear Hubs,
I am sorry that I mocked you and your horror over being in the same hemisphere as a stem off of the eucalyptus plant. I’m sorry that I teased you about it being your Kryptonite. Scentsy’s Cinnamint is enough to make me screech like a rainforest frog on an episode of When House Cats Attack.
Love,
Jedi Mama

And also? Do you want to know what else smells bad enough to make the paramedics bring out the paddles?

It’s the smell created in your gym when a first grader steps in a pile of fresh dog poo outside on the playground and then walks across your gym floor.

Today in first grade PE, we were doing our stretches and our warm-up exercises to get us all limber for a good game of Ships and Sharks, where sailors must jump from one ship (a hoola hoop) to another ship without getting gobbled up by a shark. While we were bent over, doing some toe touches, I decided that one of my little six-year-olds had very possibly done a dirty deed in his jeans. Because of this, I began quietly walking behind all of my little first graders, sniffing deeply, trying to find out who! it! was! Who? Who hadn’t made it to the bathroom? Which mother would I have to call to ask, “Um, could you bring another pair of Levi’s down to the school for Junior, please?”

About this time, one of my first graders screamed, “OH MY GOSH! OH MY GOSH! I was doing my toe touches, and I bent down to touch my toes, only I touched the gym floor, and I put my hand in poop! My hand has poop on it! I HAVE POOP ON MYSELF!!!”

This is the exact point in the time continuum when I noticed that I had splotches of brown tracked across my gym floor.

Many spots of it.

Many, many spots of it.

Hands down, the Cinnamint is still worse.

Clearly, I have had some excitement today, and the excitement just continued on throughout the evening, because we played some football tonight. 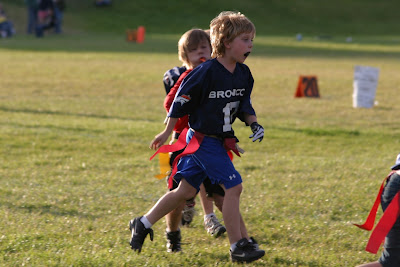 In fact, we played the boy’s cousin B’s football team. This is B, adjusting his mouthguard. He adjusted it approximately three thousand four hundred and six times during the game. The boy adjusted his mouthguard three times more than that. I’ve never worn a mouthguard myself, because playing sports in which I might get my bicuspids knocked out has never been on my list of Things I Must Do, but I hear that those mouthguards can be a little irritating. 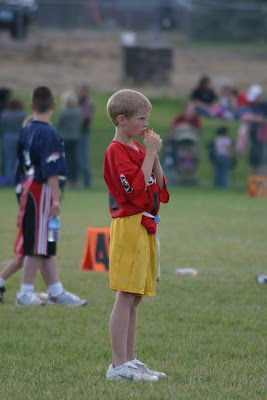 The boy did a little flag-grabbing tonight. 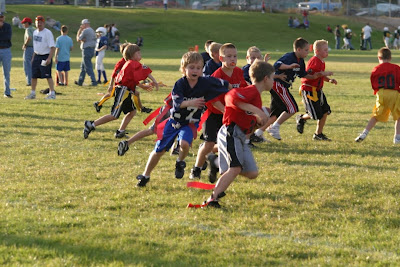 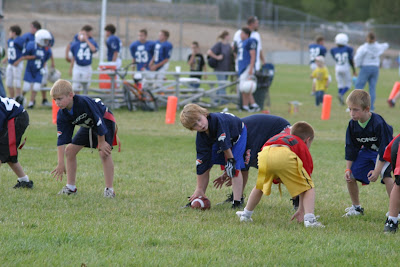 His team did a little running onto the field together. The boy is Number Seventeen. He’s the one who looks like he’s been overdosed with the cough syrup while he’s gagging on his mouthguard. Handsome little fellow, isn’t he? His mama thinks so! 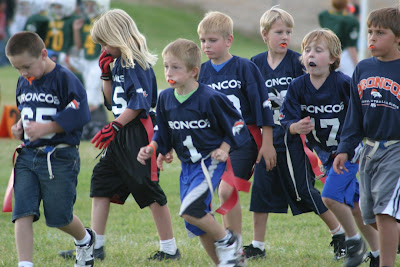 We had all kinds of friends and relatives at the football field with us tonight. We had grandmas and grandpas and aunts and uncles and cousins. Lots and lots of cousins.

Miss L was there, cheering the boy on to victory. 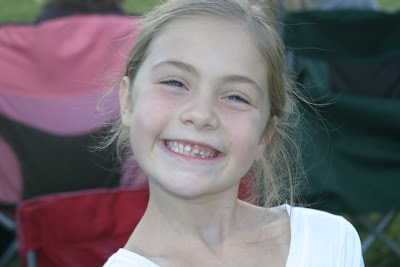 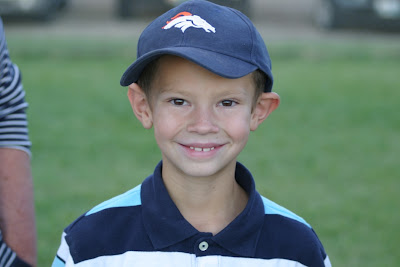 Miss A was at the football game, too. Miss A watched approximately three seconds of the game, because, sweet mercy! She had a pack of friends there, and why? Why would she waste time watching a football game when she could be playing puppies on the sidelines with other kindergarten girls from her class? 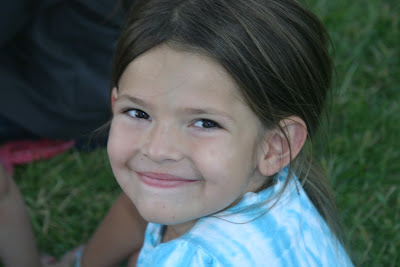 Little K was at the game, too. He watched exactly zero seconds of the boy’s football game, because he was more interested in seeing how high he could jump off of the bleachers. 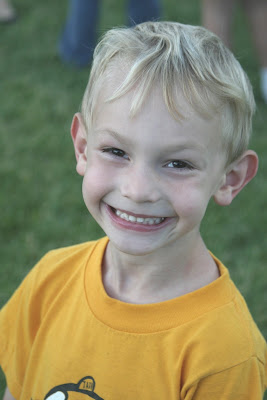 K also wanted to know exactly how muddy he could get his socks. I hope that Sister has a big jug of Tide at her house! 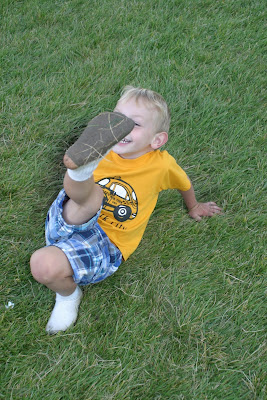 The boy and his buddy, Carter, were all smiles after the football game finished up. They were also very sweaty! 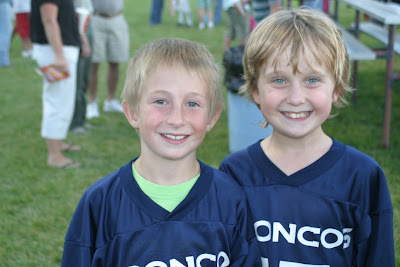 So were the boy and B. 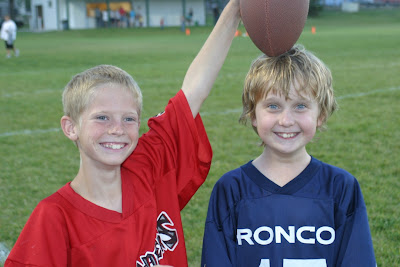 These two cousins have been good buddies since they were both wearing diapers.

Oh. And one of them needs a haircut. 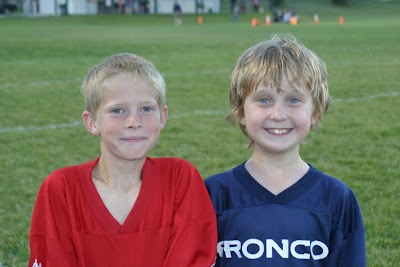 And that is, exactly, our day. We’ve had house cats attack. We’ve had frogs panic. We’ve had dog poo on the gym floor. We’ve discovered that Scenty’s Cinnamint can kill me. We’ve played some football. We’ve laughed. We’ve screeched. We’ve saved frogs from death.

It has been a good day indeed.