I have a few random things tonight, but nothing that I can string together into a cohesive blog post, so clearly, I’ll just resort to using a numerical list.

Primarily because I love lists. I love making them. I love crossing things off of them. I love the order and organization that the list brings to a life. I have, in the past, been known to add things to a list, which I have already done, but which weren’t on the list to begin with, just so that I could cross them off.

It’s a sickness, people. The OCD runs thick and deep.

1. First of all, kindergarten PE today was so much better than yesterday. It was a balmy 70 degrees with a bit of a breeze (Only here in Small Town, USA can we go from feeling like we live on the sun’s polar cap one day to feeling a little like an Alaskan spring day the next.), so I took the kids outside. Again. And I sort of dreaded it at first, but listen. The sensory stimulation items of Tuesday (the grass, and the sand, and the tree, and the leaves, and the sticks) were yesterday’s news.

Been there. Done that. And the PE teacher yelled at us a little bit for it.

Today, my thirteen kindergartners were back on top of their game. They listened. They followed directions. And we started a rousing game of soccer, after going over a few elemental skills.

Elemental skills being a phrase that was summed up in just four words: DON’T USE YOUR HANDS.

The game was fast-paced. It was eventful. It was fun. The kids were having a good time.

Boy A thought he’d scored a goal. In all honesty, Boy A was correct; he HAD INDEED scored a goal. Boy B didn’t buy it. Boy B, being on the opposing team, decided that Boy A’s goal didn’t count, and he vocally named an endless string of fouls, starting with the planets being ill-aligned and ending with an insult on Boy A’s kicking ability. This led to an immediate shoving. Boy A, not being a fan of being told that his kicking abilities were more in line with those of a girl’s, pushed Boy B backwards. Boy B landed in the grass, but his reflexes were cat-like. He bounced back up and grabbed Boy A’s shirt. Boy B, in turn, grabbed Boy A’s shirt. They both started to shake one another, back and forth.

I was across the soccer field. As in, I was on the FAR SIDE of the field, so I began to march to the Controversy’s location.

By the time I arrived at the Controversy, Boy A had kicked Boy B in the back of the knees, which successfully knocked him down. Boy A pounced on Boy B like a starving rat on a chunk of day-old bologna.

So yes, I had a fist-fight in kindergarten PE today.

And also? My kindergartners have been in school for a month now, and they still just call me “Teacher.” I love it. I also love that they show me their scabs, that they need bandages for owies that cannot be seen with the naked eye, that they tell me they love me, and that no one can tie their own shoes.

Actually, I don’t love that last part. I am, in fact, an enormous fan of the invention commonly referred to as VELCRO.

2. We have two frogs at the Jedi Manor. I may have mentioned them a time or two or even seventeen. Gru is a caught-in-the-wild, indigenous frog. Yoda Joe was, most likely, born as a tadpole in captivity in a pet store somewhere, and then eventually shipped to Small Town’s pet store. Yoda Joe, if he lived in the wild, would reside in a rain forest somewhere. He would never be able to survive a Small Town winter. He is better suited to a life of 90 degrees, with 3,000% humidity, all year long.

Yoda Joe also whines like a black lab puppy, which is not really a good thing, because then Cat 2 becomes aware of his presence, and she decides that she must hunt the frog making the dog noises. She must, in fact, hunt him to the death, and nothing (NOTHING!) shall distract her from making the final kill.

Because Cat 2 is actually a live threat to little Yoda Joe, we have had to make some changes in our household.

May I present the frog habitat? 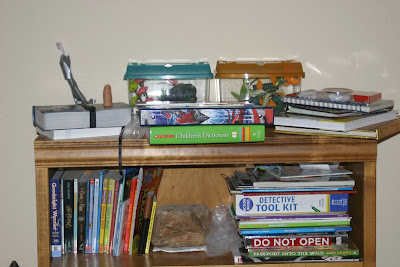 Those are actually two frog tanks on top of the boy’s bookcase. And we have surrounded the tanks with books hanging a little over the edges, which are actually a deterrent to Cat 2, when she contemplates jumping up there to have a little look at Gru and Yoda Joe. Cat 2 hesitates around the books; she is not fully convinced that she can jump to the top of the bookcase without having the big, fat, green children’s dictionary come crashing down so that it smacks her in the head.

So even though the frogs’ view of life includes one in which they can read the spines of several books, they seem to be content. And also safe.

Until, that is, Yoda Joe begins whining.

We have learned that Yoda Joe likes to eat on Tuesdays and Saturdays.

And also? Yoda Joe does not like to be cold. We have found out that leaving the ceiling fan on all night for the boy during the summer evenings will toss Yoda Joe into a full-on panic, in which he believes a winter the likes of which Pa and Ma Ingalls never had to endure is close by on the horizon.

Being a tropical creature, he fears the great blizzards, so he begins whining in fright, if he feels like the temperature isn’t balmy enough for him.

But seriously? As long as we stick to a Tuesday and Saturday feeding schedule, and as long as the ceiling fan doesn’t blow on him, Yoda Joe stays quiet.

At 1:15 this morning, I was ready to grab Yoda Joe’s little plastic tank and drive him a few blocks down the street (in the direction of due NORTH), where I fantasized about leaving him on someone else’s doorstep. My fantasy involved knocking on the door. Loudly. And then I envisioned myself leaving Yoda Joe’s tank there, with a little note that said, “I didn’t eat yesterday, and I’m grumpy and whiny!” And then I would run.

At 1:20 this morning, I went into the boy’s bedroom and thumped my fingers on Yoda Joe’s tank. I whispered, “Listen, frog! Do you have a death wish? Can you not SEE Cat 2 pacing around on the floor, formulating an attack plan?”

Well, of course he couldn’t. All he could see were the spines that read “Children’s Dictionary” and “Calvin and Hobbes.”

And also? He could see the big rubber finger perched on the boy’s Bible.

Yes, we are THAT family! That family who has a rubber finger.

Honestly, it’s from the boy’s magic kit. You slip it over your real finger, you put a handkerchief over it, and then you can successfully shove straight pins into yourself. Or so your audience will think!

At any rate, I was on the sofa in the living room at 1:30 this morning, which is as far from Yoda Joe as I could get.

Tonight, Hubs bought some crickets, and he dumped the first five bugs into Gru’s tank. Yoda Joe honestly bolted off of his rock and slammed, face first, into the side of HIS tank, as he thought he could gobble up the crickets in GRU’S tank! Oh, people! We could have won enormous sums of money on America’s Funniest Home Videos! Yoda Joe could see the crickets in Gru’s tank, and he kept trying to get them, over and over.

Dear PETA,
Yoda Joe is usually well-cared for. It is very rare that we mess up his feeding schedule, because messing up his feeding schedule ultimately messes up our sleeping schedule. Please do not stand outside our front door with signs proclaiming us horrible for starving tiny exotic frogs in captivity. The boy loves those frogs. And, nine times out of ten, they are fed on a regular schedule.
Sincerely,
Jedi Mama

3. When the boy went to youth group with his buddy, Carter, tonight, Hubs and I dashed off with our friends, Tyler and Heather, and we had dinner at a posh little steak house downtown.

I have decided that I love and adore having dinner at posh little steak houses, because (a) it’s delicious, and (b) I don’t have to cook.

For the record, I had shrimp.

Tyler had a bowl of butter with some shrimp in there somewhere.

I encouraged Hubs to find a second or a third job, so that our income could begin allowing me to eat at posh steak houses on a regular basis. Say, five nights a week. Or, better yet, what if we could afford a personal chef?! If we won the lottery, I think I’d hire an organizing nanny and someone who would just cook in my kitchen for us every evening. And then they would leave the dinner out on the table, which would be set with our best dishes, and viola. Hubs and the boy and I could just sit down to meals like Orange Glazed Cornish Game Hens, and Lobster Ravioli in in Tomato Cream Sauce, and Prosciutto-Wrapped Chicken Breasts with Herbed Goat Cheese.

Is this asking too much?

4. One of the kids in my PE class told me a joke today, and it made me laugh.

Because he felt crummy!

I know! It’s probably a hundred years old, but listen, people! I hadn’t heard it before, and the little guy who told it to me laughed so hard, I feared that he might need some dry jeans brought from home. Which, of course, made me laugh, because watching him laugh was stinking funny.

And that’s where I’ll leave you tonight.