I know that it’s been a long day, because this evening, while I was making a big batch of soup filled with broccoli and ham and cheese and macaroni, I nearly had heart palpitations and suffered premature horror over a rather weighty piece of fuzz on the kitchen floor.

I thought that it was the giant arachnid, which Hubs so lovingly shooed outside, fully intact, a couple of weeks ago. I thought that he had returned to kill me after all. There was, indeed, some gasping while I was stirring the soup, and then a sudden whoosh of expelled air, as I realized that hello!

(And also? Yes. Yes, it was me who has complained for days on end about the double batch of chili that I made on a cold rainy night last week, and then we were forced to eat the leftovers during the glorious days of the most beautiful Indian Summer on record, and really? Who likes to eat chili when it’s practically summertime outside? So what did I do tonight? Well, after we made it through the 94-degree heat today, I made a giant pot of homemade soup.)

(Learn from your mistakes much?)

I think my brain is just on overload tonight, and I’d like my kindergarten PE class to take all the blame.

Because it was 94 degrees today, I decided to take them outside for PE. Outside, where there was an abundance of sensory stimulation, which made focusing on PE nearly impossible. We had grass! Grass that must be picked by the handfuls and thrown onto each other! And the sand from beneath the swings, which was so close to us! And we had to scoop it! And throw it! And dig in it! And the tree! And the leaves! We had to grab them! And throw them at one another! And we had to break the branches off and sword fight with them!

And really? With one kid, this is just par for the course. But when you have thirteen of them, and they’re all throwing grass and flinging sand and grabbing leaves and whacking one another with sticks and digging in the dirt, it’s actually hard to explain the rules for fun games.

Somehow, though, the game’s rules got through, and I turned them loose to run! Run in the game! And chase one another! And it was so much fun.

Until they realized that it was 94 degrees outside, and that their PE teacher was standing in the shade beneath the big cottonwood tree, sipping a blueberry Fuze and cheering wildly for them. And once they realized that I was hogging the shade, they decided to all come sit with me and show me their scabs. And if there is one thing I love to admire, it’s a scab stuck on the knee of a six-year-old.

And that is when I said, “Oh my word! Look at the time! We have precisely SIX MINUTES LEFT of gym class, and y’all can just turn that into recess! Go, little kindergartners! Play on the monkey bars! Swing in the swings! It’s early recess day!“

And really? I have used A LOT of explanation points tonight. I think it’s because those thirteen kindergartners can’t really be talked about without a big, solid exciting mark at the end of the sentences!

My favorite part of their PE class today, though, was when one little guy walked up to me with a stick that was roughly as big around as a pencil and approximately three inches long stuck on the top of his ear. (Exactly like you’d imagine a short pencil being stuck there.) He told me, “This is my iPod in my ear!” And then he went on to mumble very quietly to himself, “Yeah, I can hear you. Yeah. Yeah.” He was mumbling exactly like he might be talking on the telephone. It was then that I realized that he probably meant that it was his BLUETOOTH EARPIECE. And maybe not so much his iPod. And then, a few seconds later, another little fellow marched up to me with a stick the very same size balanced behind HIS ear, and he told me, “I got an iPot, too!”

Apparently, iPots are all the rage these days!

And also as the day our nephew, W, turned eleven.

He’s the little guy who’s flashing his belly in the following picture. Only he wasn’t eleven on that day! And that’s his brother, B, and the boy (in the hat), who were apparently shaking hands in the middle of their T-Ball game.

T-Ball is all about the focus. 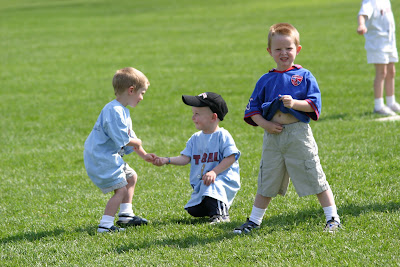 W looks a whole lot like this next snapshot now. And he doesn’t flash his belly button nearly as often these days.

Happy 11th birthday, Dub-ya! After we bought your birthday gift, I wished that I’d actually broken off a little stick for you, and you could have called it your iPot. 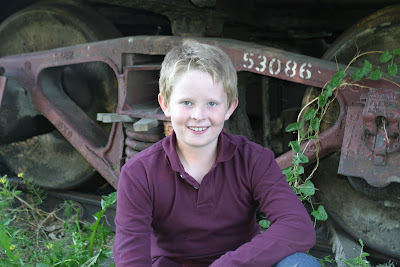