This morning, I dropped the boy off at school, and I came home to remedy the situation that was our house.

In all honesty, I can’t remember when our bathrooms or floors looked as badly as they did today. Or even last night. When we had company for dinner. Clearly, this is a whole new me, because I’ve never felt the urge to throw a spontaneous pizza party together at my dining room table when our guests were sure to have miscellaneous items stick to their socks as they strolled across my floors.

And I wasn’t too keen to have anyone over the age of ten use our bathrooms last night, either. I wanted to shout out, “Can’t y’all just hold it? The toilets! They’re awful! If you can’t hold it, could you at least piddle in the dark? Can you go in there and please NOT turn on the light?”

And then let’s not even talk about the laundry situation. I was having some horrendous issues there, too. Namely some issues which can be stated this way: The last time that I actually washed a load of clothes was a day which does not fall amidst the days which make up the last week.

Confusing, isn’t it? I can simplify that by saying, “Um, yeah. So I haven’t done a load of laundry in about a week. But Jesus still loves me, even though Hubs and I are down to our most unfavorite undergarments.”

And unfavorite undergarments can really ruin your day. Usually they get demoted to the unfavorite status because the elastic isn’t quite right. And really? When elastic isn’t quite right, they don’t really tend to stay in place, which means you get to spend your day wishing to high heaven that you’d actually thought to wash some of your favorite undergarments. And also, you get to spend time hitching things back into place.

But today, I kept my social calendar clear, and I worked exactly like Cinderella never has. Which is to say, Cinderella’s stepmother took it easy on her, compared to what I pulled off at the Jedi Manor today. All that “Wash the windows!” and “Sweep the grand staircase!” and “Oil the wheels on the carriage!” and “Scrub out the pigs’ trough!” and “Make some new candles!” was nothing, because Cinderella could have had ME shouting orders out for her today, and she would have simply raised her hand and said in weary exhaustion, “I think I’ll just move myself back to my stepmother’s house, if y’all don’t mind. And I don’t think I’ll ever complain about housework again!”

I fired up the iPod at precisely 8:10 this morning, and I let Travis Cottrell sing at decibels which I normally frown upon, now that I’m old and actually enjoy going to bed before 9:00 PM. Hubs assures me that I have Grandmother Ears these days, and that he still has Young Man Ears. Which means, in a nutshell, that he can still tolerate Ratt screaming until the crystal breaks, while I just like a nice, soft background-sort of serenading these days.

And I actually know that I’m old now, because the boy just asked me this very evening, “Mom, when you were little, did you have pens and pencils, or did you just use quills and a bottle of ink at school?”

The boy is up for adoption; please send your inquiries to the Jedi Manor.

The first load of laundry was on by 8:12 this morning.

I had started to sweat sometime before 9:00.

And then I realized that my momentum was starting to spiral downhill, and I blame it on Travis! Oh, he was busy singing his heart out for Jesus, and he is my favorite. But, listen, Travis. Your tempo this morning was slower than what I was trying to scrub to. I was on a frantic mission to accomplish the entire house before I had to pick the boy up from school, and, as much as I love “In Christ Alone,” it was entirely too slow today.

So really? I did the unthinkable. I traded Travis for some upbeat, scour-your-heart-out-like-you-just-ate-the-kids’-Ritalin tunes.

Joan Jett and Blondie and Kiss simply know how to sing to you while you’re in the Cleaning Zone!

And by 1:20 this afternoon, my house sparkled. The floors shone with a brilliance they haven’t seen in a while. Nothing (NOTHING, PEOPLE!) was out of place. There was no dust anywhere. The sinks looked like a Fairy Godmother had visited and waved her wand over them. The toilets could have been used as giant soup bowls. The counter in the laundry room had been sanitized and scrubbed down. My stove top sparkled like a fairy’s wings.

And the carpet downstairs? It was so precisely vacuumed, that it was fluffy!

(Oh, Despicable Me, I can hardly wait until you are on DVD and I can watch you just one more time!)

And if you seriously believe that I DIDN’T contemplate hanging a sign on our front door which read, “Please use the back door, people, because I just vacuumed the carpet in the family room, and I do not want your footprints squashing down the fluffy perfection,” then you completely underestimate my OCD.

At 1:30, I finally sat down for some lunch. Leftover pizza from last night. The poor double-batch of chili was still being shunned, because it was 85 glorious degrees outside, and WHO eats chili on a day like that?!

By 2:10 this afternoon, the only dirty clothes in our house were the ones we were wearing.

Let that sink in, people. Every stitch of laundry was clean, folded, and put away at ten minutes after two o’clock this afternoon.

That has happened to me twice in my entire life: once in 1998, and once again earlier this summer. It’s sort of like a full lunar eclipse. People see it happen, but it’s not very often.

This summer, when I pulled it off, my friend, Cody, gave me a card to celebrate the fact that ALL! OF! THE! LAUNDRY! WAS! DONE! AT! THE! SAME! TIME! I actually keep that card pinned to the bulletin board in my kitchen to remind me that the task IS achievable. 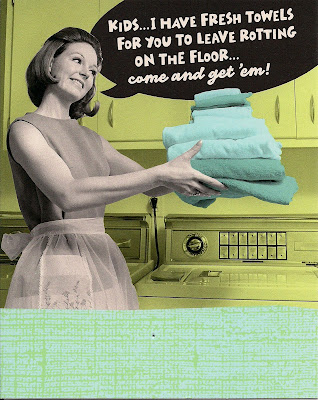 The inside of the card reads, “Don’t you just love that 12 seconds when all the laundry is done?”

By tomorrow morning, there will be dirty towels on MY bathroom floor, dirty size 8-slim shorts on the bedroom floor, and a pile of discarded socks, undies and T-shirts scattered everywhere. I’m relishing the bliss while I have it tonight, for the third time in my entire life!

In other news, I give you the boy. The boy in the BEFORE picture. 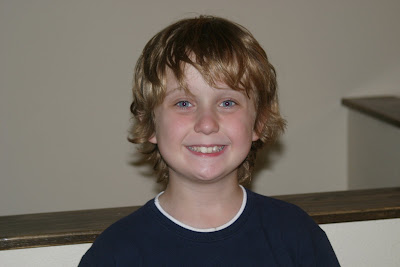 And then I give you the boy in the AFTER picture. After my friend, Susan, got her hands on him this evening while we sat on her back patio and chatted together. Oh, people! The angels sang a chorus over the loss of a little bit of hair. 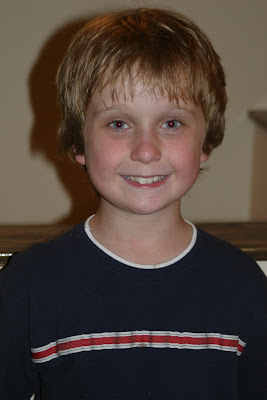 Isn’t he a cute little stinker?! Yes, he’s cute, even though he thinks I went to high school with Bill Shakespeare, and that we shared an ink pot for our quills in Contemporary Literature class.