And by work, I mean BIG WORK with LONG HOURS and also NO SLEEP.

(Go ahead and say that five times fast. I’ll wait.)

In July, Hubs and his buddy, Ryan, started a little business together. Things have been going swimmingly, and they were quite excited to score a MAJOR JOB, which involved all new computers and networks and servers and phones for a rather big business in Small Town. Naturally, it’s easiest to install a bajillion dollars’ worth of new computers and network them all together, and route them to the servers, and run wires for the new phones when no one is actually in the office, working.

The boy has not actually SEEN Hubs since Friday morning, before he headed off to the higher education involved in the 4th grade. I saw Hubs as he stumbled into the bathroom to brush his teeth at 2:30 on Saturday morning, before he crashed to catch four hours of sleep. I also saw him stumble in at 1:30 this morning, so that he could catch a couple more hours’ worth of sleep. When he left with the rooster’s crow this morning, he told me, “I don’t even know what day it is any more.”

On Saturday, I asked Hubs, “Have you guys been eating while you’re running wires and installing servers and computers?”

I asked him again today, “Have you eaten?”

And Hubs said, “I had a double cheeseburger from Wendy’s, five Mt. Dews, a couple of Cokes, a glazed donut, a couple slices of leftover pizza, an iced coffee, and two tacos from Taco Bell today.”

People, I am ready with Hubs’ detox diet, when he emerges from Big Business sometime before 8:00 tomorrow morning. Because Big Business will fire everything up at precisely 8 AM tomorrow, and the computers and the phones had better be working.

So, you know, no pressure. None whatsoever.

As Hubs left early this morning again, when he was unable to remember what day of the week it was, he told me, “I think I’ll take some Tylenol. I’m not feeling very grand.”

Hmm. If I’m counting right, that’s eleven Mt. Dews, two Cokes, an iced coffee, and basically no sleep. Yes, I can see where that might make a man a little edgy.

Since I was dedicated to being a single parent all weekend, the boy and I got right down to business, as our dance cards were a bit full.

On Friday afternoon, the boy went home with his buddy, Quinn, after school. His mama called to tell me, “I’m having a very spontaneous and impromptu party on our porch! Come! We’ll have drinks outside, and all the kids can play.”

Oh, people. There are those in life who know how to throw a party, and Quinn’s mama is one of those individuals. We had trays of organic strawberries and pea pods and grapes and carrots. There was hummus and yogurt-covered raisins and fresh apples off the tree and microbrews and wine.

And a small handful of us sat around Quinn’s mama’s kitchen, and out on her porch, and we chatted and laughed, and laughed and chatted, and it was so! much! fun!

Especially (most especially!) when Quinn’s mama gave a popsicle to Missi’s little guy, Jack (who is almost two), and he slimed himself good and proper, so that he was so covered in gooey, drippy redness, he looked like he’d been in a serious accident.

An accident with frozen organic fruit juice, after it melted!

A little before 6:00 on Friday night, I called the boy to the house, which took some effort because OH MY WORD! The kids were everywhere, from the barn to the creek to the chicken house, and it was really quite difficult to find the exact kid that you wanted to find.

When the boy showed up, I took one look at him and said, “Little Jack had nothing — nothing! — on you!” And, people, it was true. Jack had dyed himself red, from head to toe, but the boy was covered in muck and mire and dirt and slop and cockleburrs.

He had, in fact, approximately five thousand, eight hundred, and twenty-seven cockleburrs stuck to his clothing. Since we were on our way to his cousin’s birthday party, we had to make a little detour at our house, because I figured that if the boy didn’t change clothes, he’d stick like Velcro to Brother’s sofa. And to Brother’s rug. And to Brother’s carpet.

So really? When it was all said and done, Jack took a notable THIRD PLACE for the Most Dirty Boy category. The boy swept the entire competition, coming in with a unanimous win, and his friend, Kellen, placed second. It’s because Kellen’s cockleburr accumulation was six less than the boy’s was.

With fresh clothes and a quick text to Brother’s Wife which read, “We will be late,” we set off to W’s 11th birthday party, where we had homemade spaghetti and homemade garlic bread and a big, green salad.

Ironically, Hubs asked me in a quick phone call if the boy and I had eaten dinner on Friday night. I told him that yes…yes, we had. We’d had organic fruits and organic vegetables and hummus and wine (WINE!) and homemade spaghetti and a salad packed with veggies. So really? Our nutritional intake was slightly elevated over Hubs’ fifty-gallon drum of Mt. Dew.

On Saturday, Quinn’s family made a quick trip out of town, so he hung out with us all! day! long! Naturally, this thrilled the boy plum to pieces.

They look kind of sweet and innocent, don’t they? Looks can be deceiving, you know! 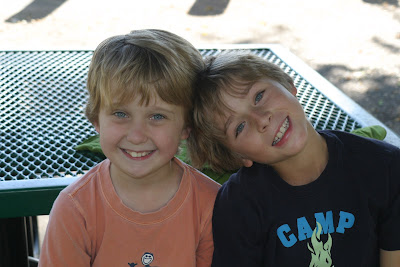 And being the prepared, organized mothers that we are, neither Sister nor I had anything for the kids to drink. But goodness! It was already noon, and all four children were also making the hungry noises, so Sister and I loaded them all up, and we took them to the new pizza parlor in Small Town.

The really snazzy new pizza parlor, which is now my most favorite place to eat.

Except, of course, for posh steak houses.

The boy inhaled enough water at the pizza parlor to keep a camel in top shape for a month-long journey across the Sahara. Quinn at five pieces of pizza. K blew five quarters in a video game in less than ninety seconds. Everyone had plenty of fun. And while the kids played the video games in the back, Sister and I sat at our table and talked. Because goodness! When all four kids left the table and headed for the games…INSTANT SILENCE!

Afterwards, Quinn and the boy and K came to our house, while Sister and L did some girly shopping (which the boys emphatically declared themselves completely uninterested in), and they rode bikes, jumped on the trampoline, went rollerblading, played tag, and ran wild outside.

Even with five pieces of pizza in the belly, I think that the caloric intake for the day was still a big negative number, what with all the exercise involved in Saturday.

Unlike Hubs’ caloric intake, which may have been a rather high POSITIVE number. A case of Mt. Dew will do that to you.

On Saturday night, Regan and her husband, Rob, pitched a little dinner-and-card-playing party. There were ten adults and seventy-six children in Regs’ house.

Wait. Ten divided by seventy-six is how many kids per family? Surely that can’t be right!

In all honesty, there were ten adults and AN EVEN DOZEN children in Regs’ house; it only SOUNDED LIKE there were seventy-six kids! And while the kids were busy making enough noise to lift the roof off of Regan’s house by four inches, the grown-ups laughed and talked, and talked and laughed, and also played some card games.

I am a total card-game loser. I need to take Kenny Rogers’ advice and learn when to hold ’em and when to fold ’em. And actually? It’s just plum easier to give up on cards and go home to bed.

So yes, if you’re keeping track, that was the third party in less than twenty-four hours that the boy and I attended, while Hubs worked.

We sort of feel badly about that.

And today? Well, the boy and I went to church. While Hubs kept on working.

And then we went to the park. Again. Because the weather was UTTER PERFECTION.

And then we came home, and the boy and the cute neighbor boy ran wild together outside.

And now all the parties and park trips are over. And Hubs is still working. Hopefully, he’s had a Mt. Dew or eight to keep him going on the homestretch.