This afternoon, I picked the boy and Amy’s little gal, Jenna, up from school, and we dashed across town, because the boy needed a haircut in the worst way.

The back of his hair was rivaling high school photos of Hubs, as far as Best Mullet goes.

While the boy was being lathered with shampoo and sitting in the twirly chair, seven-year-old Jenna and I sat together and gossiped like a couple of hens. I’m not entirely positive, but I think I could have been a fantastic mother to girls. They sit quietly in salons, they giggle cutely, and I UNDERSTAND them. Although I love and adore little boys, they do not sit quietly in salons when it’s not their turn in the chair, they would rather burp and laugh uproariously over it than giggle politely, and I do not understand them at all.

Love them? Sweet mercy, yes! Understand them? Not quite yet.

Jenna informed me that she had to clean her room when she returned home this evening, and she announced, rather boldly, that she is a fantastic (JUST FANTASTIC!) bedroom cleaner. I told her that I would love to hire her and throw genuine, backed-with-gold, American dollars at her, if she’d come over and clean MY house. She enthusiastically agreed, and I replied, “Great. My toilets could use a good scrubbing!”

This is where things went a little South, because Jenna stuttered a bit, before announcing, “Um, I don’t actually DO bathrooms. Bathrooms have toilets, and I don’t clean toilets, because toilets are gross.”

Jenna went on to say, “Oh, and I don’t clean kitchens, either, because kitchens always have a lot of work that needs to be done in them, and doing dishes is hard work, so I probably won’t clean your kitchen for you, either. Mostly, I am just a bedroom cleaner, and I would love to come to your house and clean just your bedroom. Oh, and your living room, too. I clean bedrooms and living rooms.“

I then bravely asked, “What about garages? Do you clean those?”

Although I am a little worried about Jenna’s housekeeping skills as a married adult (“Listen, honey, the bedroom’s clean, so don’t make a mess in there, and I’ve got the living room all spotless, too. I went ahead and called a cleaning service to come load our dishwasher for us, and Mom’s going to come scrub the toilets on Wednesday of next week.”), I was thrilled (PLUM THRILLED! JUST TICKLED!) to hear that boys are responsible for cleaning garages! I cannot even put into words the way that this revelation boosted my day.

Hubs, honey? Can you just go ahead and take care of that garage of ours? Now that I know that girls never clean garages, I feel so much better. Almost weightless, in fact.

At any rate, the boy’s hair has been trimmed up. 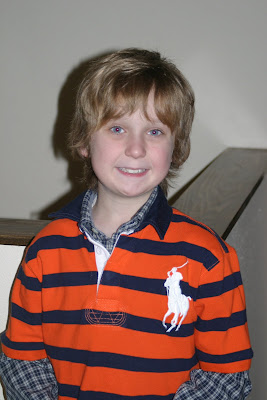 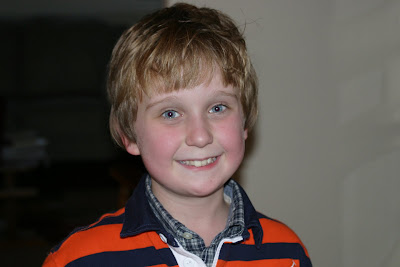 This boy? I love him so much! He’s a gem, and his mama adores him.

And when I said that I don’t understand boys, it’s because the things that they have to tell you don’t always make sense.

Take this morning, for instance.

I had to make a stop at the garage where the magic of oil changes take place. The Suburban was due. My job at this garage is to get out of my Suburban, tell the man, “Just the usual, please,” and enjoy some quiet time in the garage lobby while the oil change takes place. I have no other jobs there at the garage. None. Zip. Zilch. I certainly don’t want to be bombarded with loads of information, which, ultimately, forces me into a decision-making process.

My dad always trained me to simply tell the garage employees no to everything except the oil. New air filter? No. Thank you. (I still must be polite.) New belt? No, thank you. New lug nuts? Nope. But thanks.

After marrying Hubs, he emphatically reinforced this training, and he has always told me, “Just say no!”

I am fully aware that Garage Men will tell girls that a vehicle needs umpteen-twenty-thousand-forty-eleven dollars’ worth of extra accessories under the hood, when, in fact, all it needs is the oil changed.

Today, as I was enjoying my lobby time with a newspaper from Bigger Town, USA, two of the men came in. One said, “Bob has something he’d like to tell you.”

I prepared my speech. Rehearsed it silently in my head. No, no, no, and thank you.

I stared at Bob.

And Bob said, “So what would you like to do?”

This is where I cleared my throat and said, “Do you know what I heard just now? I heard the word Suburban. None of those other words even registered in my brain. Let me give you an example. Do you know the differences between black mascara, black-brown mascara or brown mascara? Do you know when you should use which color?”

And then Bob stared at me.

And the other fellow chuckled and said, “Bob is trying to tell you that you’ve got an oil leak.”

And Bob, with HIS VOICE SHAKING, PEOPLE, like he was now nervous and all because WHAT KIND OF MAD MASCARA-SLINGING WOMAN WAS HE DEALING WITH, went on to tell me, “Suburban blah blah blah differential blah blah gears blah blah explosion.”

I told Bob, “Um, I kind of need to drive my Suburban this weekend. When will the explosion actually take place? Can it wait to happen until, say, Monday?”

I said, “Um, no.” It was my prepared speech. The other fellow in the room said, “What you really need is a rear differential service. Your Suburban needs it badly. Very badly. I think Bob is asking if you’d like to have this service done.”

“Will it delay the explosion until Monday?”

I gave my permission, and then I frantically texted Hubs, who remains in Far, Far Away. I told him these words: “Suburban, wrong oil, Mobil not Pennzoil, differential, broken, seal, leak, transfer case. Please advise.”

Hubs texted back, “Mobil fine. JUST SAY NO TO EVERYTHING ELSE!!!”

That last part was in enormous letters, so that I would be sure to understand he was screaming this at me.

I texted back, “Too late, Hubs. I just said yes to the rear differential service. Whatever the heck THAT is! It will keep the Suburban from exploding until Monday.”

Hubs texted back, “They lie!”

“What? Explosion will still happen before Monday?”

“No explosion. They lie! How much are they charging you?”

At this point, a THIRD guy was in the lobby with me. He was the cutest thing, really. About twelve years old, with the prettiest blue eyes since Hubs’. I asked him, “That rear differential service? Are you going to charge me $400 for that, because I have no idea what it is?”

He laughed and said, “Yes. And then Bob and I are going to Vegas with the extra dollars that we DON’T put into the cash register.”

And then he said, “Actually, it’s $39.99. And you needed it. And I can tell that you have no idea what either of those two hammerheads told you.”

Was it really THAT obvious? And should you refer to your coworkers as hammerheads to the customers?

So blue-eyed, super young Guy Three went on to explain it all to me in a “See Dick run; see Jane run; see Spot run” sort of way. And I understood it, people! And I told Guy Three, “Listen. You should teach a class on small engine repair to women. I totally understood every word you said. I have no idea if I’ll retain all this information tomorrow, but I understood it. For the moment.”

And then I paid my extravagant bill, and I left.

And Hubs basically informed me that a Jedi I will never be. I had forgotten my training. My JUST SAY NO TO EVERYTHING AT THE GARAGE training.

I know; I’m a total disappointment to the Force.

And now I’ll have to forage through the swamp and the foggy marsh, while packing a pointy-eared, green troll on my back, who is constantly yammering on about how I’m much too old to start the training while he twirls his light saber at me. I will relearn the training in this swamp. The troll will become too heavy for me to carry, and I will never want to be stranded in the mud and the muck with him again, so I will learn my lesson.

I later texted Hubs and said, “I was just overwhelmed with it all in the oil garage. I saw bright lights and heard Led Zeppelin songs, and I was backed into a corner. I didn’t want the Suburban to explode, and the Led Zeppelin song was driving me crazy. I caved. I said yes.”

But then, I imagine that Hubs didn’t waste half of his day yesterday on the computer, sighing over the fact that PRINCE WILLIAM! AND KATE! ENGAGED! Because if there’s one thing that makes my heart mushy, it’s a royal wedding.

Because, while I don’t understand differential and transfer case and transmission, I do understand GOWN and JEWELRY and TRAIN and BRIDE’S MAIDS.

I just hope that Prince William’s wedding turns out as nice as Hubs’ and mine did. You know, I hope they have a great potato salad on the buffet table, like we did.

And if they ever get news that their Suburban may turn into a fiery inferno due to a leak somewhere in the gear box because the seals are broken, I hope that they just buy a brand new one.

And I hope Kate keeps the bedroom and living room clean.