On Friday, I was supposed to leave Small Town, USA and go to this: 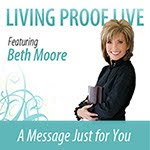 I was supposed to drive my Suburban, loaded down with girls and suitcases and hairdryers and make-up bags and Starbucks cups. We were supposed to join thousands of other women, sing our hearts out with Travis, gasp over Beth’s sweet hair perfection, and get a Word.

A Word straight from Jesus, via Beth.

And then the roads iced over, because November + Small Town = Potential For Bad Roads.

(Dear Beth, this isn’t Texas, honey. We love you; oh, how we do. However, events planned in this area of the United States might be better off happening in, say, September. When we don’t have ice and snow and 12 degrees. Thank you, Beth.)

After spending two hours back and forth on the phone between Amy and Regs and everyone else, debating the black ice and the potential for snow, we finally committed to going. Whole hog. We were in. Roads be smacked. We. Were. Going.

And then, the school nurse called to say, “Um, that boy of yours? Yeah, well, he’s fairly decently sick. And he needs to go home.”

I zipped across town, and there was my boy, sitting on a little cot in the nurse’s office, looking so tiny and so sick, and he had enormous tears running down his cheeks. The nurse told me, “It’s all I could do not to grab him up, carry him down to the library, crawl into one of the rocking chairs with him, and just rock him!” And then she whispered, “If you ask me, my diagnosis is strep throat.”

Yes. I could clearly see that. The Jedi Family doesn’t mess around with Strep Throat. We get it, and we get it often. We know the signs. We know the symptoms. We know what to do.

I walked down to the boy’s classroom, to collect his bag and schoolwork, and his teacher told me, “He looked so sad and sick this morning. Strep Throat is going around, and I was going to tell you that he seems to be showing some signs of it.”

So, instead of going to see Travis sing his heart out for Jesus and listening to Beth speak a Word, I stayed at home. While the rest of the girls went without me. In a different vehicle. And I got to look at all the pictures on my phone that they sent me. Over and over. Because those friends of mine sent A WHOLE LOT of snapshots of Travis and Beth and the dry interstate to my cell phone. Bless them.

Instead of setting off for Beth, I was busy working as one of these:

I took the boy in for a throat culture, and listen, people. NEGATIVE. He did not have strep throat, which surprised the snot plum out of me, because THAT WAS THE FIRST TIME WE’VE EVER HAD A NEGATIVE STREP TEST! When we get strep tests, it’s because we know we have Strep Throat! The Jedi Family just doesn’t DO negative strep tests.

So no Strep Throat. We came home, and the boy laid on the floor (His choice!). He was a wet noodle. He cried. He moaned. He was so grouchy, I was half tempted to paint him green and rename him Oscar.

And then HE FELL ASLEEP!

The boy has taken less than five naps since he gave them up just after his third birthday. The boy and naps never go together. Ever. If he falls asleep in the daylight hours, the boy is genuinely sick.

And, on Friday, he fell asleep in the daylight hours. In front of the TV. Later, I fed him soup, I rubbed his back, I pumped him full of Children’s Tylenol, and I put his grumpy little body to bed.

Naturally, he slept in MY bed, because Hubs was still halfway across the United States.

It was a fantastic night, because Cat 2 decided to clean her claws while she sat on her special blanket on the end of our bed. I don’t know how many of you have ever been present when a cat cleaned her claws, but all I can say is, “It’s disturbing.” It’s a lot like someone popping their knuckles, only with a crunching sound, because Cat 2 actually bites her claws and chews the grit right out of them.

Naturally, I kicked her, which caused her to hiss. I didn’t care. It was after midnight, and I didn’t need to listen to the claw chomping.

I kicked her again.

At this point, I heard her say, “Listen, lady. I don’t know who you are (Picture Dory, on Finding Nemo. Cat 2 has a significant short-term memory problem.), but this kicking has got to stop, or I will punch one of these pearly talons through your jugular. Don’t think I won’t. I will punch it right through!”

Of course, I kicked her again, and you know what they say. Third time’s the charm.

She left her special blanket at the foot of the bed, and I went back to sleep.

And when we woke up on Saturday morning, the boy was cured. The boy was fine. The boy was healthy. The boy was refreshed after a full night’s sleep. He was happy, full of giggles, and bouncing off the walls. He was hungry, and he must’ve said, “Dad comes home today!” about thirty-nine times.

Hubs did indeed came home. Of course, he was two and a half hours late, because he’d been sitting around DIA, waiting for some fog to clear so that he could board his last flight home. And then his bags were still in North Carolina, which is where Hubs made his first flight change.

And, people. It’s good to have Hubs home. I’m not a fan of single-parenting. Plus, I tend to sleep with the dining room lights on while Hubs is away, which let’s burglars know that YES! YES, HUBS IS GONE, BUT THE LIGHTS ARE ON, AND CAT 1 WILL SEE YOU COMING, IF YOU TRY TO BREAK IN AND ROB US BLIND. And Cat 1 doesn’t take kindly to strangers.

Believe me, Hubs and I have commented, over and over, “It’s a good thing she ONLY weighs eight pounds!” We cannot even imagine what her attitude, combined with some serious body weight, could accomplish. The words Saber Tooth Tiger come to mind.

Our guests would be nothing more than bloodied corpses.

This morning, we went to church. And then we went to the new pizza hot spot, which is becoming our go-to place for dining out. And then we came home, and we loafed around our house.

Although the weekend didn’t pan out quite like I expected it to, it was still a good weekend.

And it’s good to have all of my peeps back under one roof.