I’d throw some confetti into the air to help celebrate that little fact, but I do try to refrain from such spontaneous bouts of jubilee around here, because I usually remember that I’m the maid at the Jedi Manor, which means, in a nutshell, that it’ll be ME who vacuums up the confetti.

And really? After working my two jobs all week, I seldom have any extra time left to pull the vacuum cleaner out of the closet.

Those twenty working hours a week just eat up the time.

But tonight’s blog post really isn’t about the fact that I spend two afternoons a week surviving kindergarten PE or two days a week slamming my scarves into the photocopier at the church office.

Tonight’s blog post is all about Hubs, because he’s turning 42, which is a horrifically large number. Never in all of my high school career did I ever envision myself married to an old man. I just always imagined that my husband would be a young fellow, who wore acid washed jeans and Glacier sunglasses all of his life.

Clearly, things like this happen when you start sprouting inch-long gray hairs out of your chin. Overnight. It means you’re old yourself. But really? If Hubs and I are forced to grow old and start listening to public radio and buying gallon-sized bottles of prune juice when they go on sale at the local market, then I want to grow old with him.

And really? I have about forty-two other reasons why I wouldn’t mind growing old with Hubs.

1. Hubs looks really cute when he has his evening bath in the kitchen sink. 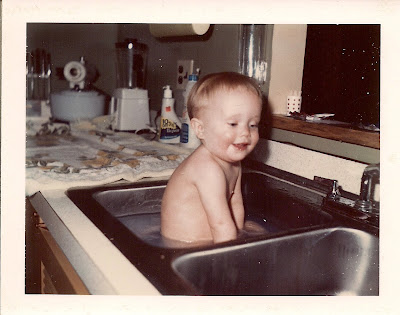 2. He can also pop off the cheesiest grins you’d ever imagine. 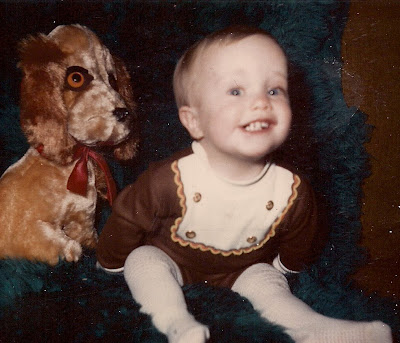 3. His attraction to open flames began at a relatively young age, and he’s continually instructing the boy and I on fire safety. (“If you’re going to use gasoline as an accelerant, never squirt it out of a squirt bottle once the fire has started. The flames may follow the spray back up inside the squirt bottle, and you’ll end up holding an explosive device.”) 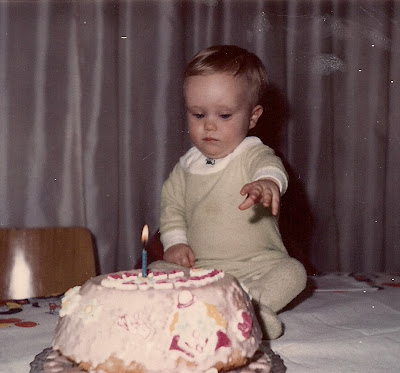 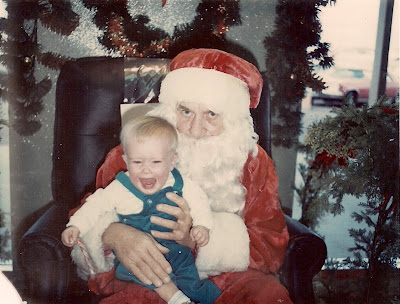 5. He’s also a guy who isn’t afraid to be seen in his red cowboy boots in public. 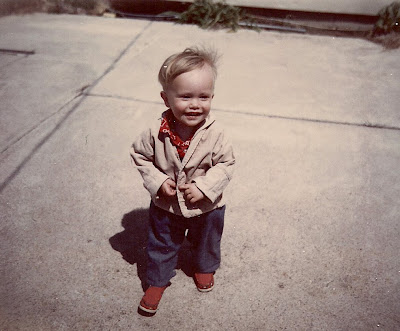 6. Those blue eyes. They make me swoon. Enough said. 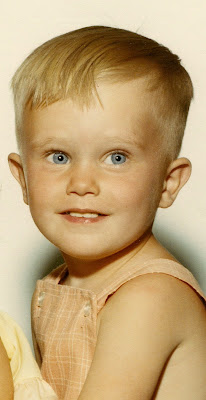 7. Hubs is never embarrassed about wearing shirts which advertise his current mood. His “I’m a Grouch” T-shirt is what he likes to wear after the Broncos have finished pretending to play football on Sunday afternoons. 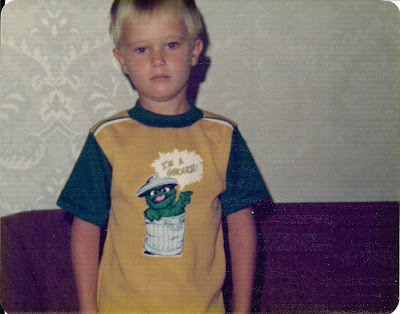 8. Hubs is never afraid to just shimmy up a front door and perch there like a crazed cat. 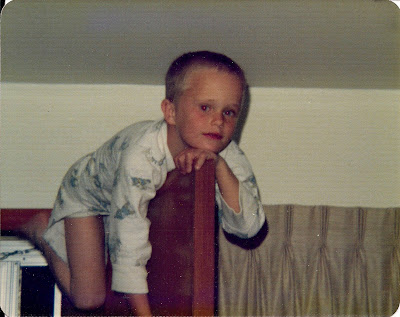 9. He always keeps his bangs trimmed up nicely. 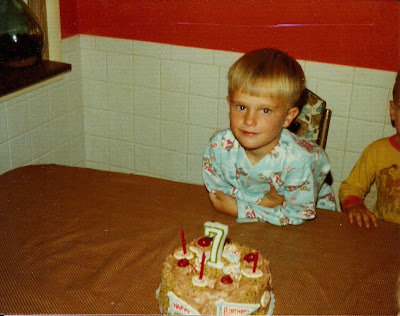 10. His favorite part in the movie A Christmas Story is where Ralphie’s mother makes him try on the pink bunny costume. Hubs likes to reenact that scene with a hand-crocheted sweater vest made for him by his grandmother. Thankfully, Hubs’ dad came to his rescue and said, “You look ridiculous. Take it off.” 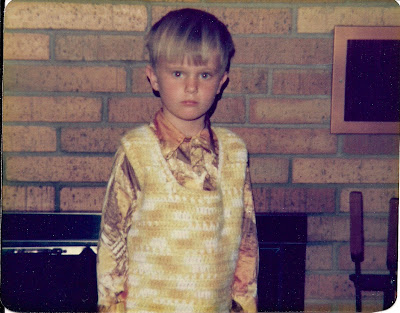 11. Regardless of the fact that Hubs pretends that he has no sense of fashion (Levis! T-shirts! Every! Single! Day!), he has always secretly known that vertical stripes make the body appear longer and slimmer. When Hubs was eight years old, he desperately needed the illusion of longer, as his three-year-old brother was almost as tall as he was, but I don’t think that he needed the illusion of slimmer. 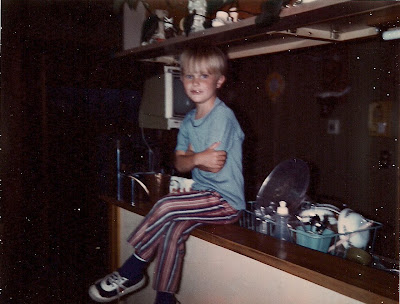 12. Hubs has always known the definition of Working Vacation. Because of this, he likes to throw a table saw into the vehicle, along with his suitcase, in case he runs across a house in Palm Springs that needs some baseboard put up before the family goes golfing. 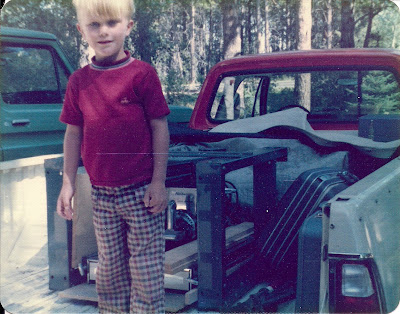 13. Hubs isn’t afraid to give that little sister of his a side-hug. (His secret, but ever-present, sense of fashion also knows that when you wear a plaid, one-piece short set, you’d better make sure you’ve got a solid shirt beneath it. Hubs knows that you never mix your patterns.) 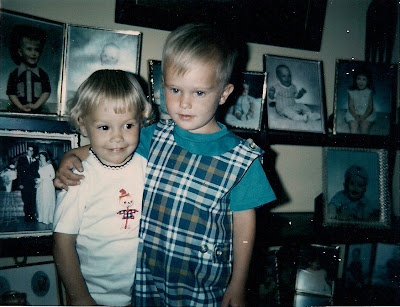 14. Hubs has spent his time in homes with carpeting not approved by Martha Stewart, which is why he let us splurge when we built our house and install luxurious hardwood floors. 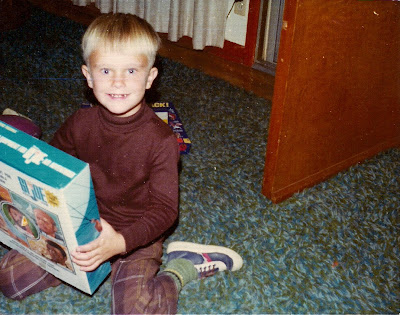 15. Even though Hubs was a bit stressed out when he and I both accidentally wore an orange-colored shirt to church one day this summer and everyone asked him if he was trying to be my twin, he’s secretly not afraid to dress as a twin. Or as a triplet, for that matter. (And really? Isn’t it sweet how Hubs is holding Brother Joel’s hand, and how Brother Joel is holding little Brother’s hand? I think this snapshot was taken right before they all sang a rousing rendition of Kum Bay Ya.) 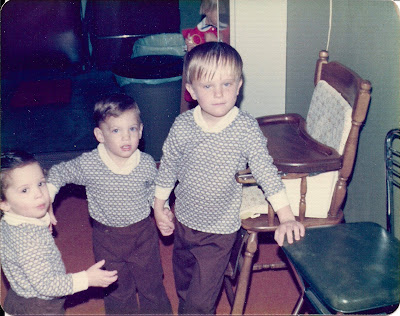 16. Remember the boy’s buddy Carter? And remember how he wore some nerdy glasses for his Halloween costume this year? I told you that Hubs had a pair on in his 5th grade school picture! 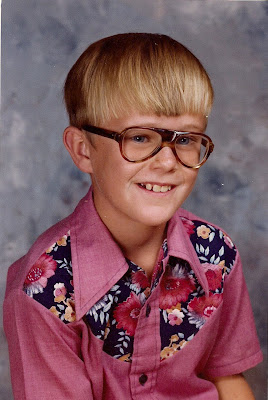 17. Hubs has some muscles. Even as a ten-year-old, he wasn’t afraid to split the biggest stump in the wood pile. 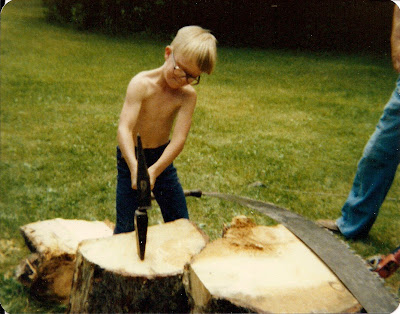 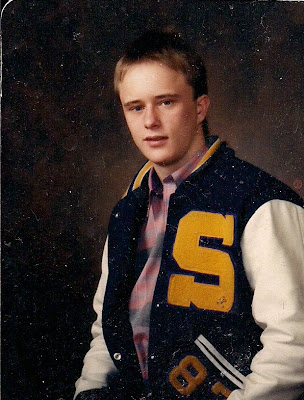 19. Hubs never panics, either. He and I always joke that the boy’s motto is No Need to Hit the Panic Button Just Yet. Hubs perfected that lifestyle for himself long before the boy inherited it.

20. In contrast, I have usually smacked the panic button an hour and a half early, and then, oftentimes, I just SIT on the panic button, so that I know it’s forever deployed and activated. Hubs usually assures me that this isn’t always beneficial to my health.

21. Hubs gets so excited about hockey every year, we sometimes have to make paper chains out of construction paper, so that he can rip a link off every night before bedtime to keep track of HOW MANY DAYS LEFT UNTIL THE AVALANCHE OPEN THEIR SEASON each October.

22. Hubs is a stick-with-it kind of guy. Take the Broncos, for instance. Even though Hubs grumbles every single Sunday evening that THE BRONCOS! THEY ARE DEAD TO ME, he’s always on the Big Fan Train the following week to cheer them on.

23. Hubs will lay on the boy’s bedroom floor for hours on end and build things out of Legos with him.

24. Hubs is never afraid to speak his mind. Once, when two elderly women with tightly-permed, blue hair had stopped to chat in Wal-Mart’s parking lot, they set their two shopping bags on the back of Hubs’ ’68 Camaro, because that was the unfortunate point in the parking lot where they ran into one another. Hubs came out and said, “Hey! What do you think this is? A shelf?!”

25. Meat. It’s what’s for dinner, as far as Hubs is concerned. Vegetables are what his food eats, before it becomes his food.

26. Hubs never thinks that anything is hot enough for him, with the exception of one habanero pepper in 1996.

27. It was the habanero that made him sweat.

28. It was the habanero pepper that made him ask to be driven home so that he could writhe in agony without an audience.

29. Hubs has never given up his dream of becoming a Navy SEAL, even though he shot himself in the eye when he was sixteen, and the Navy decided that anyone who could actually shoot his own eyeball might not be someone they wanted to send on top secret missions.

30. Hubs announced the other day, “You know, next to AC/DC, I think I like Waylon Jennings best.”

31. Hubs has been playing a whole lot of Waylon’s songs lately.

32. Waylon’s songs are officially on my very last nerve.

33. Hubs continues to have a problem with Coke. The kind that comes in the red cans. Four Cokes is considered a primer for Hubs, before the real drinking starts.

34. Hubs is also developing a slight problem with Mt. Dew.

35. Hubs may need to enter a twelve-step Soda Rehab program.

36. Hubs thinks that Velveeta is an ingredient in plastic.

37. Hubs also sleeps with headphones in his ears almost every single night, which are plugged into the radio, which is tuned to some obscure radio station that airs programs in which people look for UFOs. Hubs has a hard time sleeping without the headphones, because his ears ring constantly due to entirely too many loud Metallica concerts in the late ’80s, and ringing ears keep him awake. However, he can sleep right through a static-filled radio program.

38. Hubs can also stay focused on the boy’s questions for a whole lot longer than I can. The boy, you see, asks a LOT of questions. And there are days when I am all questioned-out and need to sit in a dark closet and rock back and forth, but Hubs never does. He keeps answering the questions.

39. Hubs is a risk-taker. He’ll buy every single piece of property in the game of Monopoly. Every. Single. Property. He. Lands. On. He’s also brave enough that he took the plunge this summer and started his own business. The boy and I are quite proud of him.

40. Hubs has a heart for Jesus that’s simply huge.

41. And when I’ve sat on the panic button for hours on end, Hubs usually tells me how Jesus would handle things and talks me down off the ledge.

42. He’s still, after all these years, a fantastic kisser.

1 thought on “He’s Still Cute, After All of These Years”