I may have mentioned one or nineteen times that Hubs had a birthday this weekend.

One of his birthday gifts resulted in the Jedi Family gaining a new family member. 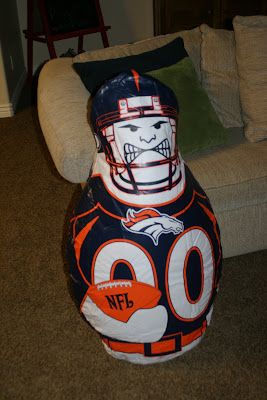 Hubs emphatically declared that he’s going to dress him in a hoodie and name him Josh.

Josh is going to sit beside Hubs while Hubs watches the Broncos play some football.

Thankfully, the weighted sandbag in his bum makes him pop right back up.

Straight out of the box, Josh had a slight problem. It’s called a MINOR HOLE, but that came as absolutely no surprise to us, because Denver’s entire defense has a MINOR HOLE in it.

And really? If you must know, I laughed out loud at my friend Susan’s joke today.

What do you call 47 millionaires sitting around a big screen TV, watching the Super Bowl?

Why, the Denver Broncos, of course!

I’d better quit while I’m ahead. Hubs is loyal to the orange and blue, and I may be sleeping in the doghouse tonight.